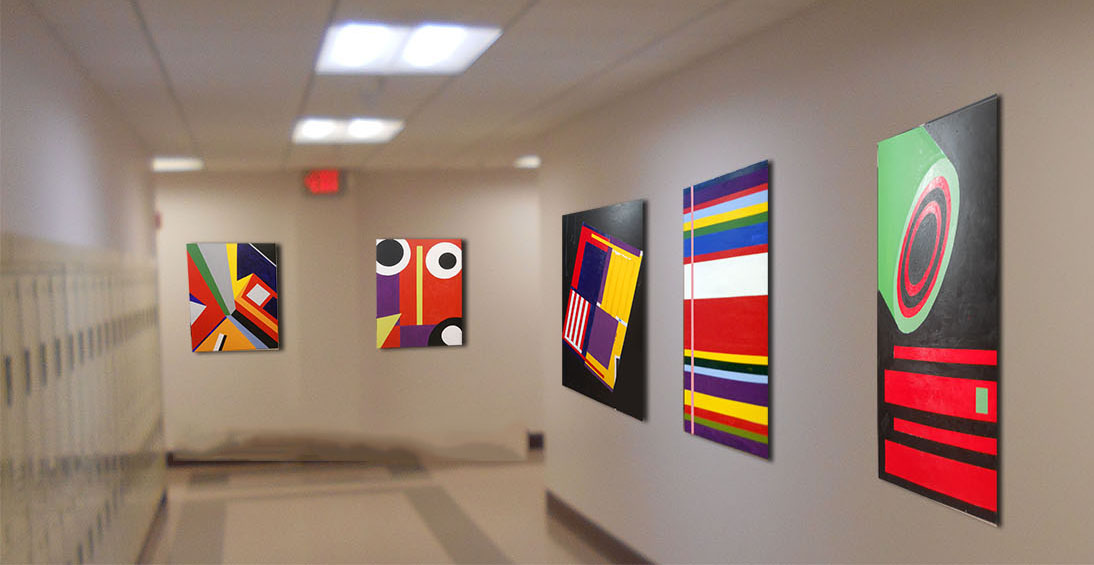 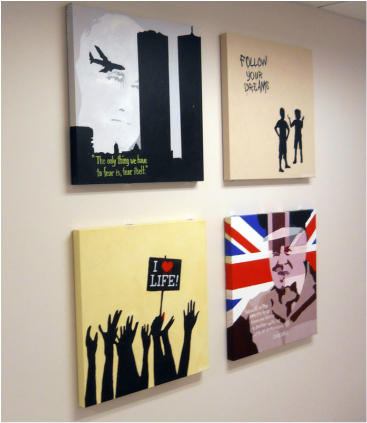 “Bolder and Bigger is Better,” is a multi-phase project to create student-made murals for all Falmouth schools. In the spirit of the project’s name, it has grown over time.

“When I first applied for the Falmouth Education Foundation (FEF) grant to fund this project, I had no idea where this was going to lead. It has blossomed big time,” Mr. Holladay said. “The artist David Hockney said if you can’t see something from a distance then why bother doing it?”

The inspiration came from seeing artwork decorating the expansive walls of Falmouth Hospital, and the initial grant, awarded to Mr. Holladay for the 2012-2013 school year, funded printing supplies, paint and boards for eight murals – one for each school. A subsequent grant enabled the project to expand to include the School Administration Building, school libraries, and additional works which are quickly filling up the formerly barren walls of FHS. FHS Principal Joseph Driscoll has also offered financial assistance.

“We never could have done this without FEF because the printing is very costly,” Mr. Holladay said. He added that the grant served as the impetus for the establishment of a new cross-discipline mural class at FHS.

Mr. Holladay’s Graphics 1-3 students design the murals using software such as Photoshop or Illustrator, print them large-scale and work in groups to paint them. Technology studies teacher Jim Brooks constructs display boards allowing for the artwork to be changed in the future.

While smaller murals can be completed as solo projects, sophomore Alex Manos enjoys the opportunity to work with his classmates.

“I like the large murals because you get a chance to collaborate with other kids, so there is a team aspect to it,” he said.

The democratic process also comes into play when choosing the subject matter, which ranges from brightly-colored geometric shapes in the math wing, to work reminiscent of Banksy and Shepard Fairey representing the various disciplines, such as Abraham Lincoln and Teddy Roosevelt in the history wing. Although themes must be approved by faculty, staff, and administration, the project offers the artists a forum for self-expression while serving as a time capsule of their world.

Senior Brittney Woodward, an artist who is new to graphic design, also stressed the impact made by Mr. Holladay.

“He’s one of those people who can teach anyone anything. He can take kids who have never even picked up a paint brush before and now they’re painting things that are hanging in the school,” she said. “I wish I had taken his class sooner. He has taught me skills I will carry with me as an artist.”

Junior James Bailey believes the project has not only changed the aesthetic of the school but also the energy.

“When I was a freshman, there was nothing on the walls and now we’re bringing in all these vibrant colors. I think it’s a better learning environment because it stimulates you,” he said. “This project has given the students a voice and a way to spread their creative wings and show their peers what they can do.”

“John is like the Pied Piper. The kids love him and now all the teachers want a mural,” he said. “This project is tremendous, especially since the artists have their names on the artwork. It instills a great deal of pride.”