Pollinator Party Celebrates the Role of Insects iN Cycle of Life 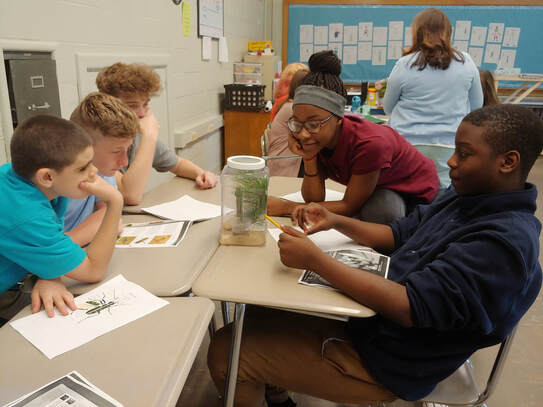 Students at the Lawrence School recently celebrated their pollinator garden, and specifically the bugs who frequent it, with some local experts in the field.

Located in front of the school next to the auditorium, the garden project initially began three years ago with the construction of vernal pools at the two schools to be used for outdoor laboratories. Since then, FEF has provided additional funding, as the grant has expanded to support a pollinator garden at Lawrence, offering students a tangible way to understand the connection between man and nature.

“The kids have really witnessed the progression of the pollinator garden over the past two years, and they’ve seen a lot of flowers and insects out there. So, we wanted to promote the importance of insects, in general,” Ms. Brothers’ said.

To that end, she organized a “pollinator party” which was staged on June 3 at Lawrence School as fun way to acknowledge the integral role that insects play in everyday life. The visiting entomologists included master gardeners and beekeepers from the Barnstable County Cooperative Extension, and representatives from Massachusetts Audubon Society, Cape Cod Mosquito Control, and the United States Department of Agriculture/Animal and Plant Health Inspection Service. The morning of mini lessons ranged from topics such as swallowtails to silk moths, and flower dissection to honey tasting.

“The presenters focused on three main aspects. The first is obviously the pollination piece, which is critical for crop production,” Ms. Brothers said. “We also had a number of people who research invasive insect species, the kind of damage they cause, and the work being done to reduce their effect. The third aspect involves insects that potentially cause disease in humans, such as mosquitos and ticks.”

Additionally, the lessons addressed the effects of pesticides on honeybees, native pollinators, and monarch butterflies.

Among the invited guests were members of the FEF board of directors, including President Ellen Barol. Ms. Barol was impressed by the scope of the event, which included 14 volunteers sharing their knowledge.

“This culminating event, that brought together students and community experts, was logistically ambitious: lots of moving from room to room around the school. But the staff and students were wonderful and the visiting experts were interesting and upbeat,” she said. “It was a lively ending to the year's work on the vernal pool and pollinator garden. FEF is very proud to be part of this multi-disciplinary, cross-age project.”

The grant also lends itself to an educational collaboration with the school’s neighbors at Mullen-Hall Elementary School, which is the aspect Ms. Brothers finds most rewarding.

“It makes me so happy when the kindergarteners walk over to Lawrence and the big kids show them how they test and measure the water in the vernal pool and all the different things they catch. It’s absolutely adorable and just amazing to see,” she said.

“Falmouth Education Foundation has awarded us more than $12,000 over the past three years to fund all the various pieces of the pool and garden. We never could have undertaken these projects without the generosity and support of FEF.”