Project Empowers Students to Own Their Best Learning Style 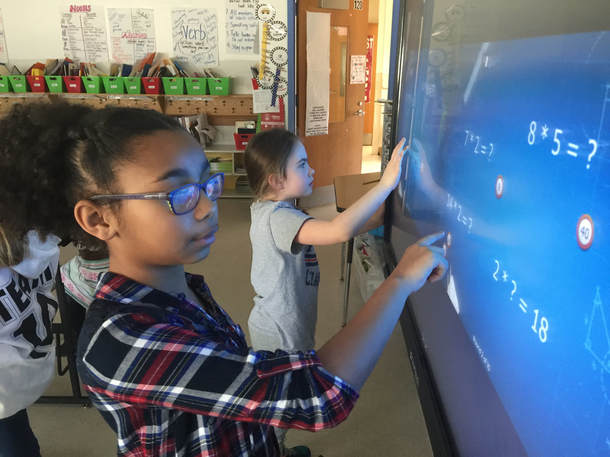 The implementation of two 21st century classrooms at East Falmouth Elementary School are not just changing the way students learn, they are preparing them for the future.

Spearheaded by fourth-grade teacher Elijah Switzer and third-grade teacher Jill Meserve, and funded through a grant from the Falmouth Education Foundation, the project is designed to support both group learning and independent working. They purchased alternative seating and work stations, in addition to a portable Clear Touch interactive panel that is shared between the two classrooms. The large screen features 15 points of touch and access to mobile apps and software.

For Mr. Switzer and Ms. Meserve, who wrote the grant together, the goal is to test their shared belief that achievement increases when students are empowered to identify and optimize their own best learning styles. Unlike traditional classrooms settings of the past, in which students sat solitary at their seats while writing in notebooks, youngsters are standing among their peers and working through problems together, all with the swipe of a finger.

Mr. Switzer benefited from technology in the classroom as a student at the University of Iowa, and wanted his elementary school students to have similar access.

“I’m always trying to think about ways to improve my practice each year to stay modern, so I wanted a piece of technology that the kids could collaborate on that would be consistent when they touch it,” he said. “I’m very grateful to FEF for their support.”

Mr. Switzer consulted with Cindy Tougas, Director of Technology and Libraries for Falmouth Public Schools, who suggested the Clear Touch, an innovative new tool utilized in business and education. According to Mr. Switzer, the panel enables students to take ownership of their education, for there is less emphasis on teacher instruction and more focus on peer-to-peer learning, negotiation, debate and compromise.

“Traditionally, a 45-minute lesson might involve a teacher lecturing for most of that time. Instead, I talk for a for a few minutes, and then they collaborate with each other to develop their own discussion questions.” he said. “I try to guide them in a direction to help them discover what they’re supposed to be learning rather than just delivering the information.”

Mr. Switzer has found it to be particularly effective during reading lessons, for the free-form nature of the screen allows students to chart their notes and sketch scenes.

The project also enabled the students to choose between wobble seats, scoop seats, stand-up desks, or sitting on the carpet to determine what suits their learning style.

“As teachers, we tell students to take responsibility for their own learning but the first thing we do when they walk in the classroom is tell them where to sit. To me, it’s counterproductive to take away that freedom,” Mr. Switzer said. “They will have to make that decision for themselves when they enter a college classroom or a business meeting, so this is teaching them that their choices affect their productivity.”

East Falmouth Elementary School Principal Justine Dale credited Mrs. Meserve for initiating the school’s movement toward alternative seating through a past FEF grant, which has led to seating and work station options that better meet the needs of today’s students.

“Since then, Jill Meserve and Elijah Switzer have enhanced their classroom instruction through advanced technology implementation with the support of our dedicated FEF. The access our students have to interactively demonstrate understanding in groups, pairs and individually with our new Clear Touch panel is proving to be motivating and exciting,” she said.

Mrs. Meserve uses the panel primarily for teaching math, which enables multiple students to work collaboratively on separate problems rather than a SMART board which only allows one user at a time.

“Third grade is a big jump in terms of academics and social independence, and with the Clear Touch, it’s all about collaborating and taking turns. It sounds basic, but it’s really not. These are things they will take with them in the future when they have to work with other people,” she said. “It also makes it safer to take a risk, because you’re not at the front of the class with your teacher, you’re up there with your peers.”

“In my class, if someone makes a mistake, I celebrate that, because we’re all going to learn from it. So they’ll say to each other, ‘It’s okay. Have you tried doing it this way?’ And if two groups come up with different answers to the same question, they have to problem-solve together to figure out which one is correct,” she said. “They’re working together with technology to learn from one another. That’s not just something that happens in a third-grade classroom doing a math workbook page; it’s transferring to real-world skills.”

Mrs. Meserve expressed gratitude to Falmouth Education Foundation for their continued support over the years.

“With their contributions, I have implemented things in my classroom that I never thought I could. They are so generous and this town is so lucky to have them,” she said.

“The staff at East Falmouth is appreciative of the assistance to our school community through the many grants received. Our district is fortunate to have the foresight and vision of Falmouth Education Foundation, and to have them as a partner for teaching and learning,” she said.