Foundation To Honor The Shermans at Winter Gala 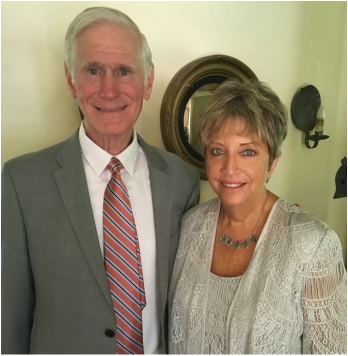 Since making Falmouth their home in the early 1970s, Kathy and Richard Sherman have given back to the community in countless ways, through their shared commitment to public education and volunteerism. Falmouth Education Foundation will honor that dedication at its 2017 Winter Gala on Saturday, March 4. Tickets are sold out, but a waitlist is forming; call 774-763-2347 for details. Sponsorship opportunities are available.

Board Chair Ellen Barol said FEF is grateful for the opportunity to acknowledge the Shermans’ many contributions to Falmouth.

“Kathy and Rich Sherman are tireless and compassionate community-builders. If they see a need or a way to strengthen our town, they get to work. As former public school teachers, they are avid supporters of our schools, and they are strong advocates for teachers and students,” she said.

Mrs. Sherman began teaching special education at Mullen-Hall and East Falmouth elementary schools, and Mr. Sherman served as the town’s recreation director before teaching elementary school. The pair have donated countless hours of volunteer service to a variety of local and regional organizations. They would go on to spend 38 years as co-directors of the Falmouth Road Race before co-founding the Flag Day 5K in 2011, an event that has raised more than $40,000 on behalf of FEF.

Mrs. Sherman served on the FEF board after retiring in 2006, feeling motivated to join after witnessing firsthand the tangible results of FEF’s work.

“I see in so many different ways how much better the education is in Falmouth now because of what FEF has made available - - from art to robotics to music to coding,” she said. “That’s why we decided to name FEF the beneficiary of the 5K; we want to raise as much money as we can because we know how much FEF improves the lives of students. Their innovative programs help children shine in all different ways, especially those who might not be reached in the traditional way.”

Mrs. Sherman, who visited President Clinton at the White House in 1996 after being named Massachusetts Teacher of the Year, underscored the imperative need for making learning accessible to all students.

“Public education is more important now than ever. There is such a financial divide in this world, and we need to rely on top-quality public education,” she said.

It is also a belief she holds as the mother of two grown daughters, Katie Sherman Fauth (a school adjustment counselor at Falmouth High School) and Elizabeth Sherman, both of whom attended Falmouth Public Schools from K-12.

Former FEF board member Geoff Nickerson credited the Shermans for establishing the 5K, which has become FEF’s second-most important fundraiser after the gala. Nickerson, who runs in the 5K every year, is also on the board of the Falmouth Road Race.

“Rich and Kathy have worked hard, along with their volunteers, to make the Flag Day 5K a successful event. FEF is lucky to be the beneficiary of the race, which I’m sure will remain a fixture in road-racing for years to come,” he said. “I’m grateful to the Shermans for all they do for Falmouth and FEF.”

Mr. Sherman said the event was born after he and his wife stepped down from the Falmouth Road Race. They started brainstorming with Jo-Ann Leaf, who taught with Mrs. Sherman at East Falmouth, and with whom they worked at the Road Race, about a way to utilize their talents.

“The three of us weren’t quite ready to retire, and we had over 100 years of knowledge between us. We wanted to put that to use while also doing something for the community. Therefore, we share this award with Jo-Ann and the hundreds of volunteers who have supported the Flag Day 5K, and all the volunteers who worked with us at the Road Race,” he said.

“We’re just two of the thousands of volunteers in this town. We know how many wonderful people put in countless hours, so this is extremely humbling.”

Barol said the honor is well-deserved.

“FEF has benefited enormously from the Shermans' commitment to educational excellence—just for one example through their decision to make FEF the beneficiary of the 5K. In many other ways, both public and private, Kathy and Rich have made a difference in our schools and our town. We are proud that they have agreed to be our honorees at Gala 2017.”

FEF’s Winter Gala at the Coonamessett Inn, which regularly sells out, will feature a live and silent auction as well as dinner and dancing to Stage Door Canteen. The event will begin with cocktails at 6 p.m. Tickets are $75. Call Meghan Buckley at 774-763-2347 for more info.

Proceeds from the Gala will support teacher-initiated projects, based on grant proposals submitted to the FEF board. Since it was founded in 2006, FEF has granted more than $600,000 to nearly 200 innovative projects ranging from new engineering programs at the Lawrence School to literacy programs, playground enhancement, art projects, and new technology.